Clara Casian is a Romanian visual artist with an interest in archives and deconstructing histories through personal and political lens. Her work combines carefully constructed archive fragments of historical significance with hybrid mixes of image, sound and text, layered in a rhythmic montage.

The encounter with the history of Savoy Books expanded her interest in the use of archives. A Savoyard’s First Brush with Censorship looked at the context behind the publishing work of M. Butterworth and the early signs of censorship in the 1970’s Manchester. The film was followed by further research and the resulting film House on the Borderland connected Butterworth’s recollections of The Savoy Wars – a twenty-five year battle with the Manchester police, overlaid with Fay Ballard’s narrative of her father JG Ballard’s creation of an artwork. The project on alternative publishing and censorship was supported through the Artist Film scheme at HOME, Manchester and was developed as part of Feature Expanded, an international training programme in between Manchester and Florence. House on the Borderland, was shown as part of LA MOVIDA 14th Apr – 17 Jul 2017, HOME Manchester.

In 2016, Casian has completed Birdsong-Stories from Pripyat, the film and music collaboration with composer Robin Richards around the topic of Chernobyl. The steps took in completing the project involved a series of film sessions in Chernobyl exclusion zone, more specifically the Pripyat town, which was left deserted after the evacuation. The resulting work uses video archives, records of testimonies from liquidators, echoes of the disaster, in order to develop an aesthetic practice that responds to the tensions between industrial and man-made. The piece premiered as the highlight of HOME’s Artist Film Weekender with a sold-out performance in Cinema 1, followed by a second performance and student masterclass at Salford university the following week, then a performance in Stockport later in October. Birdsong – Stories from Pripyat is accompanied by a new project which will be released in 2020, The Earth Asleep, that responds to the tragedy of the 2011 Japanese Tsunami and Fukushima disaster.

Recent projects include Intentional Community, a feature length film in collaboration with visual artist Nick Jordan, with support from Arts Council England. In her latest film, Sediments – Barrow Islands, she draws parallels between discarded and forgotten histories and abandoned sites of memory, such as the abandoned colossus ships of Constanta seaside resort, and the industrial military remnants in Barrow Islands. Sediments – Barrow Islands explores the history of Barrow in Furness and the tensions between natural and man-made environment, strange earth’s metamorphosis caused by traces of ecological processes and environmental cleanup. 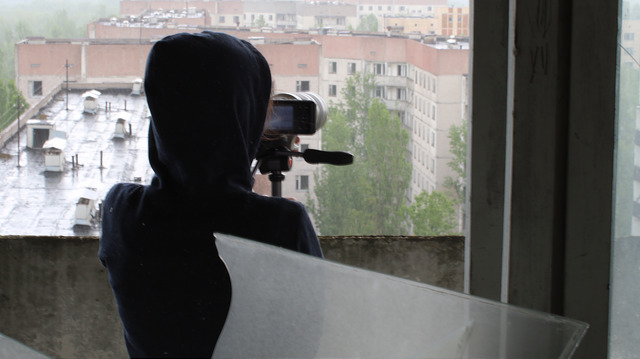 Production still in Pripyat, during the making of Birdsong – Stories from Pripyat